Born in the ship bloc region of Nn’Verih on chi’Rihan Shiarrael spent most of her early life in the massive Rehu estate. Ever since she was a young girl Shiarrael never really knew her father, the Rei’Krannsu Riov was always off somewhere, but the girl adored her mother. Being the only child of this noble house a heavy expectation was put on her shoulders to perform greatly and take her fathers place in the Rei’Krannsu, though Shiarrael never shared that opinion. 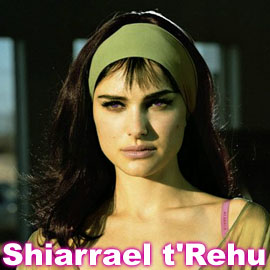 Shiarrael prior to joining starfleet.

While growing up she found that she enjoyed many things such as the sciences, and engineering courses. Ever since she could remember she would pull apart trinkets and then try to fit them back together. Though her joys were not limited to the passive arts, she excelled at Tenalri (Romulan Kickboxing) at an early age winning many competitions; however she enjoyed the Kormerek more, even though he mother disapproved.

Often she would return home from unsanctioned Kormerek matches bloodied and bruised. The servants would rush her in and hide her from her mother until they had a chance to clean her up; her mother was well known for having a heavy temper.

When she reached the age of 14 her father returned home to see that Shiarrael completed her training and joined the Rei’Krannsu. However, knowing that the Rei’Krannsu would rarely see combat she secretly left her family’s estate and went to the Phi’lasam where she joined the Star Navy under the name Mosaram t’Ourai. For the first year no one suspected her of being anyone else, she excelled in her studied and proved lethal when it came to combat.

During her second year at the War College Shiarrael’s identity was discovered when an investigator from the central agency hired by her parents traced her there. The confrontation with her father was intense; he demanded she leave the Galae academy and return home to join the Rei’Krannsu. She would retort “I have no interest in becoming an antiquated showpiece.” Infuriated by the insult her father would unsheathe his Kaleh and charge at Shiarrael. Using a Kormerek fighting technique she would end up shattering her father’s nose and cracking his cheek. Defeated, he agreed to her posting; however through his influence he ensured that she would not follow the same path as the other officers.

After spending years in the War College she would leave to a Command Position on the Saeihr’llaiir. Initially she refused, wanting to work her way up the ladder, however her father’s pressure made it impossible for her to do so. To remain in the Galae she would have to command a vessel. The thought of her father controlling her fate angered her to no end, when it came time for promotion to a higher position in the fleet; she had refused every single one.

During the first war against the Federation in 2398 Shiarrae was appointed to head the strategic operations of her wing. She played an integral part in drawing up the plans for the attack on Tomika and Federation Starbase 220. After the war ended she was offered the position of Wing Commander in the 3rd fleet, however she refused.

For the next three years Shiarrael was content to just be a patrol vessel Commander. It was during this time that she gained the nickname of Riov Yhisu (Captain Dread) for how hard she worked her crews. Though she was kind, Shiarrael demanded perfection, and ensured that her crews got as close to perfection as possible.

Shiarrael in her Romulan Navy uniform.

In the 2401 war against the Federation, Shiarrael would lose her first command during the battle at Yadalla and become a prisoner of war. During the fight the Saeihr’llaiir would end up severely damaged. Ordering her crew to evacuate she attempted to destroy the vessel but the self destruct mechanism had been destroyed during the battle and she would end up captured by the Federation to spend the remainder of the war as prisoner.

During her capture her opinion of the humans would change, she no longer resented them so much as she respected them. After the war ended and she returned home to ch’Rihan she received her second command of the SRR Ishae-a’thrai (Blazing Wolf).

Over the next several years she would maintain a low profile. She had little interest in petty exploits and enjoyed the relaxing duty of patrolling the neutral zone. However in 2407 when asked by Vaek’Riov tr’Verelan to take over a patrol wing, Shiarrael agreed becoming the Wing Commander of the ninth patrol wing in the Rhi’Galae. Later she would accept the position of his RS on Aylhr to take over the reins of the First Defense Wing.

In late 2407 she assisted Starbase Versailles and a Starfleet taskforce in stopping a planet destroying machine. For her role in that event she was removed from her command of the wing and put in charge of the Romulan side of Ahuian. She controlled it through several crises' such as the outbreak of the second Dominion War and the Krivaldi threat.

In early 2408 she assisted Captain Aiden Bravado with a reconnaissance mission of Shydal Prime and later Vice Admiral Jolias Enor at the Battle of Typhon.

After the Second Dominion War came to conclusion, political entities within the empire began searching for new political causes. Shiarrael, who was responsible for the death of Vajen tr`Lasik, became a symbol for the Zorek clan's hatred of the Praetor. Because she also mothered two children with Captain Aiden Bravado she would be accused of treason against the empire by the Zorek, resulting in her banishment from Romulus by the senate continuing committee.

Shiarrael returned to Astate after the exile and lived with her two infants in Captain Aiden Bravado's colony quarters. For awhile she believed she would spend the rest of her life as simply a 'housewife' however Admiral Enor approached her with an opportunity she could not refuse. The chance to command a ship again, but this time, for Starfleet.

After accepting the position Admiral Baldr Odin was sent to Astate from Starfleet Command to personally instruct Shiarrael in Starfleet rules and regulations.

Personality wise Shiarrael always has always been passionate. Even as a commanding officer she often gave impassioned speeches to motivate her crew. It is also the reason why she enjoys jousting with Klingons, often in settlements along the Klingon border she would pick fights in bars and clubs just to fight hand to hand against Klingons. Often her crews would end up taking her out of the bar drunk and bloodied, but she enjoyed it tremendously, fighting as her crew and bar patrons cheered her on.

Also known for her beauty Shiarrael has been approached on multiple occasions by potential suitors, all of which she declined. Rumors have flourished that she fell in love with a human while a prisoner; however she has vehemently denied such claims. Instead she saw her mother’s regret of having left the Rei’Krannsu and vowed not to invest in anything until she had acquired her afw'ein (purpose).

Shiarrael fell in love with the eccentric and cow boyish Captain Aiden Bravado. The two became exceptionally close after the joint reconnaissance mission to Shydal Prime. She would end up pregnant with twins after a bout of lust with the Captain.