In the northern telling of the ancient Rihannsu story of Rhea's Helm, the demon whom inhabits the helm, is thusly named Rhae'go. That version as it turns out, was also one of Ameh'ah t'Neyl's favorite childhood stories. So when her first son was born, she was determined he would bear the name of this head biting demon.

Aside from a perhaps and auspicious name, Rhae'go's early childhood would be considered pretty normal for a Rihannsu child. His father spent a lot of time off-world commanding a ship in the Galae. Though his mother was home more, as one of the vice-chairmen of the Tal'Diann, a lot of her time was spent perusing fleet dispatches and sparring with the Tal'Shiar. So that left Rhae'go plenty of time outside his studies to explore around his family's estate outside of Ahai near the Apnex sea. He would spend long hours chasing the estates' Hlai flock, swimming in the Apnex sea, and playing with the servant's children.

It wasn't until his 12th year of life when things began to turn. During a mission his father would perish in an accident. This event led to him becoming closer with his grandmother Jhu t'Pardek. He found all of the attention after his father's death suffocating. Though his mother tried to give him adequate space she was also difficult to deal with at times after his father's death. When he turned 14 he immediately enrolled in the Romulan War College.

Rhae'go adapted quickly to life at the War College. He focused on his studies and found Quantum Engineering to be of particular interest. Aside from his studies he also participated in several extracurriculars and became adept at the game D'Elo. It was also during his time in the war college that he would become close friends with D'Nal tr'Noramei, who would eventually become his RS, and lover.

After he graduated from the War College and began his Serona he served as the Paectum aboard the IRW Okhala. He developed a lot of his skills under the tutelage of his Daise'Paectum Veran tr'Danlek. It was also aboard the Okhala that he enrolled in classes from University to further his study and research of Quantum Engineering. He would take over the Daise'Paectum position from tr'Danlek after the latter completed his Serona. He would serve in this role for several years. 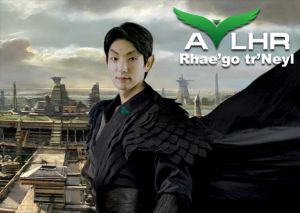 Death of Mother and Traitor Label

There are few things worse in the Star Empire than being labeled a traitor or being kin to someone labeled a traitor. After his promotion to erie'Riov, Rhae'go was offered and accepted the role as Leih of the IRW Kholhr. Returning to ch'Rihan (Romulus) his mother decided to throw a celebration in honor of his achievements and invited several of the Galae Admiralty to attended. This included several of his cousins from the Zorek clan. During the celebration a large explosion would kill many of the attendants including his mother. Fortunately for Rhae'go he had offered to go retrieve more ingredients from a local market and was not home when the explosion occurred.

Many blamed his mother for the explosion declaring that it had been an intentional act to kill Zorek clansman. Although Rhae'go was adamant that this was not the case the authorities refused to listen to him. Eventually, after protests, he would be exiled along with the IRW Kholhr to the Eastern fringes.

He would spend the fifteen years purposefully isolated to his command of the IRW Kholhr. Everytime he would be recommended for promotion it would be turned down. He slowly began to realize that his name had become poison after his mother's death. It wasn't until he served in the short lived Klingon war a and helped liberate the Derex system that he finally received a promotion to Riov.

Rhae'go is typically a relaxed and reserved person. He prefers to think and analyze situations and acts based on his thoughts rather than emotion. He has an aloof command style and gives his crews a lot of freedom- this is either a benefit or hindrance depending on one's perspective. As an engineer at heart he truly enjoys learning about how things work.