Jolias is the sixth host of the Enor symbiont, and the third male host. He was chosen for the Enor symbiont after its 5th host died mysteriously. He was originally a geneticist for the trill government until inspired by other Trill to join Starfleet which he later did at the age of 20.

Excelling in the Academy landed him superb field assignments, one of which was an archaeological excavation where he found an ancient artifact that did not belong to the culture of that time. After preliminary analysis it was discovered that the artifact was millions of years old and that the atomic configuration was not from that planet. To this day, the origin of that artifact is still unknown.

After graduating from the academy with honors he became the assistant science officer on the USS Mammoth, he served three years in the assistant position and was able to reach the rank of Lieutenant Junior grade, a few months later the Chief Science officer was killed during a Geological survey of a uncharted planet, Enor was soon promoted to the chief position. He served as the chief science officer on board the Mammoth for two more years reaching the rank of Full Lieutenant in his service. 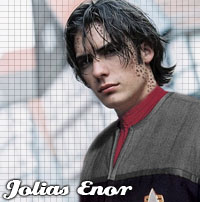 During an away assignment for an archaeological excavation Enor discovered an ancient artifact in an old unstable tomb, when he had fully scanned it to confirm that it was indeed authentic he tried to prepare it for a move when the dig site where he was located became structurally unsound the ceiling was going to cave in on him. He considered leaving the artifact to be crushed or try to save it… knowing that failure would mean death. While several others scattered out of the underground chamber Enor remained and worked quickly to retrieve the artifact. He was successful and got out two milliseconds before the whole section collapsed. He received a commendation from Starfleet.

After the incident Enor was assigned to a lighter assignment onboard the USS Phoebe a medical ship assisted them in different medical experiments due to his knowledge in the field of Genetics. Onboard the Phoebe he met a young doctor by the name of Raine Hiltz. Enor and Raine formed a relationship and married but a deep rift formed between them later on. They would separate and then divorce. Later on in his career he would discover that his former wife had been killed in a shuttle accident and the news bothered him greatly.

After serving two years on the Phoebe he decided it would be best if he found a position elsewhere and by this time he had already made the rank of Lieutenant Commander. When he received an offer from omicron sub-fleet to head their fleet science it was an offer he could not resist.

While serving as Omicron Fleet Science adviser he became tired of his desk job. Wanting a job on the field again he took the first chance he got and joined the USS Warrior as their Chief Science Officer.

When he arrived on the Warrior his skills and abilities quickly lead to him becoming Commanding Officer within a year. For several years Enor Commanded the USS Warrior with distinction. After the birth of his son he would leave the Warrior and pursue a less demanding field in archeology leading a six year expedition on Xenex.

After the six year expedition Enor left Xenex in route to Earth onboard his Saber class ship, the USS Shakaar NCC 24570, when he received a message from the Beta Fleet Commander. Commodore Nathan Acheson would inform the then Commodore Enor that he had been reassigned to deal with the conflict torn settlement of Astate Colony. Reluctantly Enor agreed and the Shakaar changed course for Astate Colony within the Neutral Zone. Upon his arrival Enor would be promoted to Rear Admiral.

Personally Jolias is the father of two children, his daughter from a previous marriage Nitka Korialis (Age 18), and his son Thomas Korialis (Age 12) with his wife Samantha Myers. When not on duty Jole enjoys spending tremendous time with his kids, it is one of the reasons he decided to lead the archeology unit of Starfleet Science after his service on Warrior ended.

The Admiral Resides with his family in the Korialis Estate on the Naiaid Mountains overlooking a small valley village.

Learn more about the Enor Symbiont.

This Character is played by Thomas