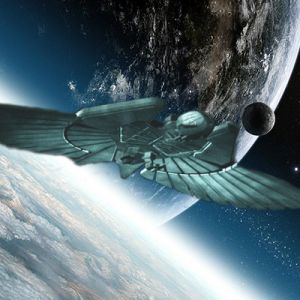 The first IRW Aylhr was the prototype for the D’Aylhr class Command cruiser. In 2400 she was based at Koahht Hama and became the flagship of Rhi’Galae (5th Fleet). When the war with the Klingons ended abruptly and the Romulans turned on the Federation Riov tr’Thrai took command and joined the battle group which fought and won at Drakken III and Barradas. After the Romulan failure at the battle of Yadalla command of the Aylhr switched over to Conn’Hae tr’Rok and the vessel was reassigned to the Galae’tho (6th Fleet).

In 2401 while out on patrol word came thru to the Aylhr that a terrorist organization had taken by force the D’Deridex Warbird, t’Rakla, based at Koahht Versailles. Erie’Riov tr’Caernu organized his Wing to search for the rogue ship. One of the ships detected a faint cloak signature and the Aylhr joined with three K’Sejnik class Destroyers (Old ships, out of use now) in the pursuit. The t’Rakla was discovered and the four Romulan ships crossed the Neutral Zone into Federation territory. Battle took place, unfortunately, the Warbird had been taken by a Zakdornian Terrorist Group known as the Revenge Faction of Zakdorn and were expert tacticians.

During the battle one of the Destroyers, the SRR Terha was lost and erie’Riov tr’Caernu was forced to turn and flee back over the Neutral Zone when a Federation Patrol came too close. Not wanting to cause an incident so soon after the war he had no choice but to withdraw leaving the enemy ship to escape. However, tr’Caernu had been able to beam a crewmember over to the Warbird and place a transponder beacon on it so that if the ship should return to Romulan space it would be identifiable instantly, something which was not commonly known to the crew.

By 2403 command of the Aylhr has switched to a young erie’Riov, Argelian tr’Ahaefvthe, whose first mission was to tackle a smuggling operation within the neutral zone. After capturing a group of Orion smugglers, the Aylhr crew discovered that the operation involved the dangerous Romulan drug ‘mindbang.’ After lengthy interrogation, they were able to learn that the mindbang was set to be delivered to Vulcan. When they discovered that the recipient was a wanted fugitive of the Empire, a former spy, tr’Ahaefvthe decided to let the delivery go ahead. If the Empire could not have the spy, at least his addiction would eventually claim him.

Under Argelian’s command, the Aylhr participated in the successful Jurei war campaign and went on to help the Romulan resistance remove Galae’EnRiov tr’Mandak from power. In 2406 Argelian would join the house of his bond mate, taking the surname Verelan, while also receiving the rank of Khre’Riov. Shortly after his bonding he would be given command of the Galae’tho (6th Fleet) and departed the Aylhr.

In 2407 the Aylhr would be assigned to Ahuian as the command ship for the Romulan legate and flagship of military commander Ael’Riov Shiarrael t`Rehu. While stationed at Ahuian the Aylhr would play a pivotal role in helping the Federation turn the tide during the Second Dominion war. After discovering that the Dominion intended to invade the Star Empire after defeating the Federation, Shiarrael t`Rehu, met with the commanders of the Rhi’Galae (5th Fleet) and convinced them that the only way to prevent the invasion was to help the Federation. Once consensus was reached, EnRiov Argelian tr’Verelan granted permission for the Aylhr to lead a large strike force against a Lyran fleet attempting the join the Second Dominion forced. At Typhon, the Romulans force under the command of Ael’Riov t’Rehu launched a surprise attack against the Lyrans, obliterating their fleet along with the prospects of the Second Dominion defeating the Federation. 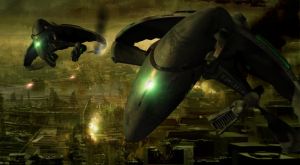 At the end of the Second Dominion war, the Aylhr would find itself mothballed until 2415 when she would be temporarily crewed as part of an emergency strike force against a Klingon incursion. During the first battle of Dherex against Klingon forces, the Aylhr would sustain a significant amount of damage rendering the ship derelict. After the battle, the Aylhr would be towed back to space dock where it was determined that she was unsalvageable. Once the conflict ended the Aylhr would be taken to the Romulan ship breaking facility in orbit of Constantus where it was decided that components and materials of the ship would be used in the construction of a D’Dherex class vessel that would bear the same name.